Family Friendly There are some steep grades and edges where you have to keep an eye on this kids, but this loop is a great option for a family due to its easy access, relatively moderate grades, and great views

Because of its exposed slopes, the Queen’s Garden portion of this trail becomes snow-free earlier than many other area trails, often fully accessible from April to November.

This is a very popular way to get off the rim and down into Bryce Canyon. The ease of access, relatively moderate grades, and spectacular views make the loop an all time favorite. Don’t be lulled by the short mileage of this trail, be prepared for a steep climb out whether completing the loop in the clockwise or counter clockwise direction.

Bring yaktrax or other foot traction for winter travel. Some people with a fear of heights have reported feeling nervous in some parts. Keep kids away from the edges.

Prepare to be amazed by this magical trip through otherworldly rock formations. This popular trail can be crowded especially near the rim, but the throngs often thin out in the lower canyon reaches. From Sunrise Point, drop into the canyon along a steep but wide trail along a ridgeline. Weave down through towering multicolored spires and past sparsely wooded areas. The most sweeping views occur at the top, but as you descend, the cliffs and hoodoos encroach. After a series of switchbacks and a few man-made tunnels, the descent eases considerably. Proceed through a ravine with multicolored hoodoos galore. Take the short spur to see the Queen Victoria rock formation – she’s in the center viewing the spired garden around her. Back on the main trail, cross washes and pass through forest over mostly level ground. Contour around the base of a large cliff formation before reaching a trail junction with the Navajo Loop and Peekaboo – Navajo Connector. Take the eastern half of the Navajo Loop Trail northwest (back toward the rim). This eastern half of the Navajo Loop is also called “Two Bridges” for the double arch visible in the distance. Climb up a wooded slope as the cliff walls get taller and closer as you ascend. After a very steep section of switchbacks, the Thor’s Hammer formation appears (big block on a skinny pinnacle). Continue up through open terrain until reaching the junction with the Rim Trail at Sunset Point. To complete the Queens Garden Navajo Loop Trail, turn right on the Rim Trail heading north. After nearly a mile on this flat paved path, your journey ends back at Sunset Point. 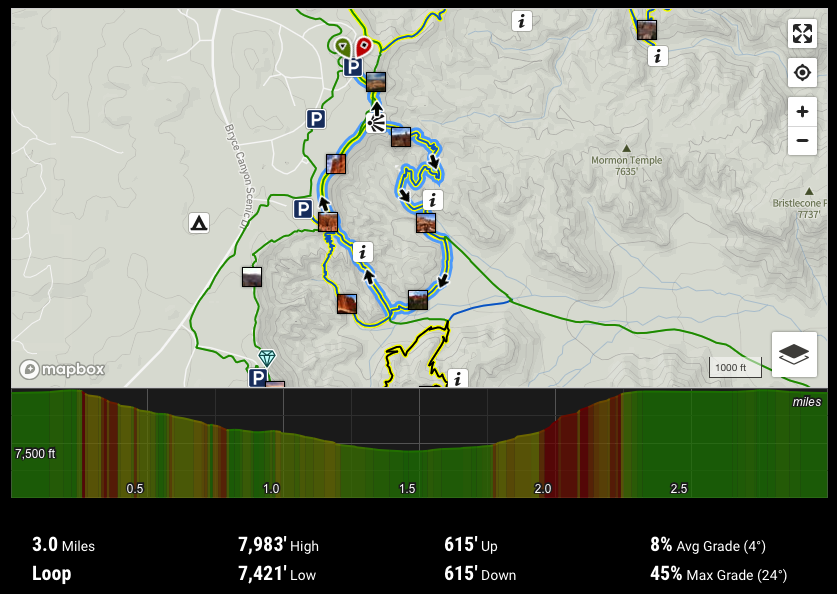