Cockburn Street is a picturesque street in Edinburgh’s Old Town, created as a serpentine link from the High Street to Waverley Station in 1856. 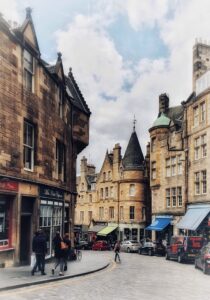 It is named after the then recently-deceased Scottish lawyer, judge and literary figure Henry, Lord Cockburn who was influential in urging his fellow citizens to remain vigilant in ensuring that early-Victorian expansion, e.g. improvements such as Cockburn Street, did not irrevocably damage or obliterate the built heritage and environment.

Lord Cockburn’s head is carved over the entrance to 1 Cockburn Street (the former Cockburn Hotel) which now serves as offices for the Edinburgh Military Tattoo.

The Battle of Bannockburn