The Heart of Midlothian is a heart-shaped mosaic, formed in coloured granite setts, built into the pavement near the West Door of St Giles High Kirk in the High Street section of the Royal Mile in Edinburgh. 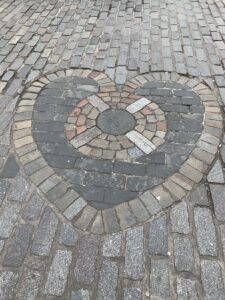 It is situated close to Parliament House, which formerly housed the Parliament of Scotland and is now the home of the Court of Session.

Together with brass markers bearing building dates, it records the position of the 15th-century Old Tolbooth, demolished in 1817, which was the administrative centre of the town, a prison, and one of several sites of public execution.

The mosaic is named after the historical county of Midlothian of which Edinburgh was the county town. This is not to be confused with the council area of the same name which covers a smaller area and does not include the capital.

Visitors to Edinburgh will often notice people spitting on the Heart. Although it is now said to be done for good luck, it was originally done as a sign of disdain for the former prison of which the entrance lay directly at the Heart’s location. It is thus probable, that the spitting custom may have been begun by the accused.

And We are Off!

Watch California Condors take their first flights in the wild during the 27th annual public condor release, in-person and live-streamed!﻿