Today is our last day in Southern Utah, we are going to spend the day up at Bryce Canyon National Park. We are both excited.

If you have never visited Bryce Canyon, you will quickly learn that its not an actual canyon, like you would find down at Zion National Park.

The major feature of the park is Bryce Canyon, which despite its name, is not a canyon, but a collection of giant natural amphitheaters along the eastern side of the Paunsaugunt Plateau. Bryce is distinctive due to geological structures called hoodoos, formed by frost weathering and stream erosion of the river and lake bed sedimentary rocks. The red, orange, and white colors of the rocks provide spectacular views for park visitors. Bryce Canyon National Park is much smaller, and sits at a much higher elevation than nearby Zion National Park. The rim at Bryce varies from 8,000 to 9,000 feet (2,400 to 2,700 m).

Saydie and I both loved the change in altitude and the much cooler weather having spent much of the last week in Zion and before that the Page, Arizona.

The Bryce Canyon area shows a record of deposition that spans from the last part of the Cretaceous period and the first half of the Cenozoic era. The ancient depositional environment of the region around what is now the park varied. The Dakota Sandstone and the Tropic Shale were deposited in the warm, shallow waters of the advancing and retreating Cretaceous Seaway (outcrops of these rocks are found just outside park borders). The colorful Claron Formation, from which the park’s delicate hoodoos are carved, was laid down as sediments in a system of cool streams and lakes that existed from 63 to about 40 million years ago (from the Paleocene to the Eoceneepochs). Different sediment types were laid down as the lakes deepened and became shallow and as the shoreline and river deltas migrated. 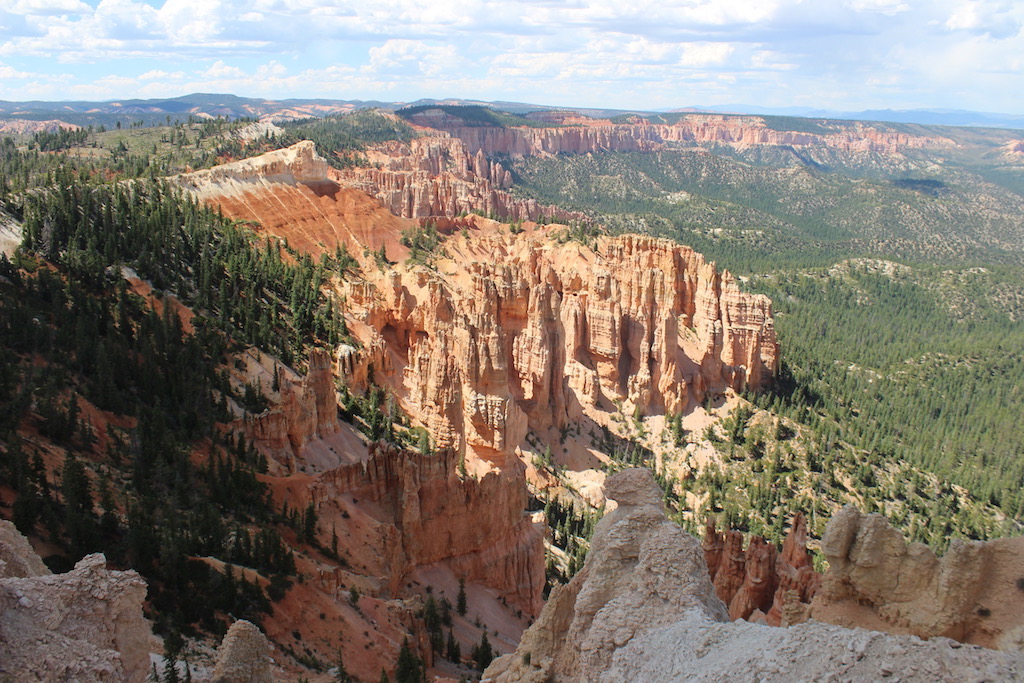 Several other formations were also created but were mostly eroded away following two major periods of uplift. The Laramide orogeny affected the entire western part of what would become North America starting about 70 million to 50 million years ago. This event helped to build the Rocky Mountains and in the process closed the Cretaceous Seaway. The Straight Cliffs, Wahweap, and Kaiparowits formations were victims of this uplift. The Colorado Plateaus were uplifted 16 million years ago and were segmented into different plateaus, each separated from its neighbors by faults and each having its own uplift rate. The Boat Mesa Conglomerate and the Sevier River Formation were removed by erosion following this uplift.

The Bryce Canyon area was settled by Mormon pioneers in the 1850s and was named after Ebenezer Bryce, who homesteaded in the area in 1874. The area around Bryce Canyon was originally designated as a national monument by President Warren G. Harding in 1923 and was redesignated as a national park by Congress in 1928. The park covers 35,835 acres (55.992 sq mi; 14,502 ha; 145.02 km2) and receives substantially fewer visitors than Zion National Park (nearly 4.3 million in 2016) or Grand Canyon National Park (nearly 6 million in 2016), largely due to Bryce’s more remote location. In 2018, Bryce Canyon received 2,679,478 recreational visitors, which was an increase of 107,794 visitors from the prior year.

The air in the area is so clear that on most days from Yovimpa and Rainbow points, Navajo Mountain and the Kaibab Plateau can be seen 90 miles (140 km) away in Arizona. On extremely clear days, the Black Mesas of eastern Arizona and western New Mexico can be seen some 160 miles (260 km) away.

The park also has a 7.4 magnitude night sky, making it one of the darkest in North America. Stargazers can, therefore, see 7,500 stars with the naked eye, while in most places fewer than 2,000 can be seen due to light pollution, and in many large cities only a few dozen can be seen.

Watch California Condors take their first flights in the wild during the 27th annual public condor release, in-person and live-streamed!﻿