Written by trekvagabond
No Comments
Badlands National Park is in South Dakota. Its dramatic landscapes span layered rock formations, steep canyons and towering spires. Bison, bighorn sheep and prairie dogs inhabit its sprawling grasslands. The Badlands Loop Road (Highway 240) winds past scenic lookouts. Several trails begin near the Ben Reifel Visitor Center. The Fossil Exhibit Trail is a boardwalk with displays on fossils uncovered in the park. Considering all that this park has to offer, you might be wondering — what’s so bad about the Badlands? The Lakota people dubbed this region “mako sica,” or “bad lands,” long ago because its rocky terrain, lack of water and extreme temperatures made it difficult to traverse. Today, the Badlands are a great place for hiking, fossil hunting, taking a scenic drive and spotting wildlife. Its geologic formations are millions of years old. The rugged rock formations that many people think of when they hear “Badlands” were not always here. Over tens of millions of years, layers of sedimentary rock were deposited in this region as the environment changed drastically from sea, to subtropical forest, to open savanna. After all of these layers were deposited, waters flowing from the Black Hills began to wear into this sediment, carving valleys and other shapes into the landscape to create the Badlands as we know them today. Though this process began roughly 500,000 years ago, it is still going on now, eroding the Badlands at the rate of about one inch per year. Geologists estimate that after another 500,000 years, the Badlands will have eroded away completely — so don’t wait a half million years to visit. You might find a saber tooth cat. In 2010, a young park visitor came across a fossil at Badlands National Park and reported it to rangers. Much to her surprise, this visitor’s discovery turned out to be an incredibly rare, well-preserved skull of a saber tooth cat. Saber tooth cats aren’t the only creatures hidden among the layers upon layers of sediment in the Badlands, though — fossils of all kinds of animals and plants including rhinoceroses and marine reptiles can be found in the park. Fossils in the Badlands date back to the late Eocene and Oligocene epochs, when three-toed horses, camels, creodonts and other intriguing mammals roamed the world — so don’t expect to find any dinosaurs here. Most of these fossils are about 30 – 40 million years younger than the last dinosaurs to roam the earth. If you come across a fossil while exploring the Badlands, please do not move it. Instead, report it to a ranger so that it can be studied in place and possibly taken to the park’s Fossil Preparation Lab for research and testing. Between the second week of June and the third week of September, you can visit the Fossil Preparation Lab in the Ben Reifel Visitor Center to watch paleontologists work and learn more about the ancient life they get to handle every day.     You might as well make a road trip out of it. 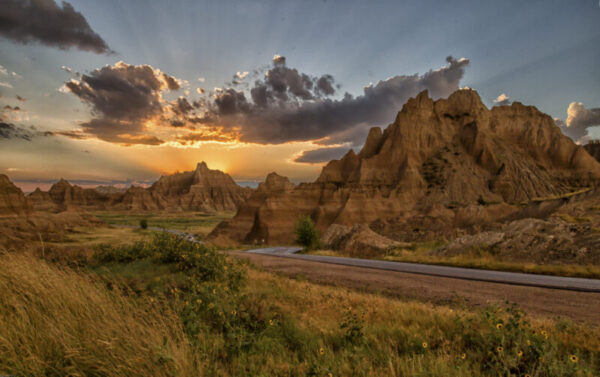 Far from any major airport and treasured for its scenic byway, Badlands National Park is a perfect stop or destination for your next road trip. If you plan on staying the night here, you can set up a tent right next to your car in one of the park’s front country campgrounds, or – if camping isn’t your thing – you can stay at Cedar Pass Lodge in the spring, summer or fall. The Badlands are an especially great road trip stop because of their proximity to other cool and unique places; Mount Rushmore, Wind Cave National Park, Lacreek National Wildlife Refuge, Minuteman Missile National Historic Site and Jewel Cave National Monument are all within two hours’ drive. It’s a great place to learn about Native American history and culture. The Lakota people – members of the Oglala Sioux Tribe – have lived in the Badlands region since time immemorial. Many notable Native American leaders and warriors were members of the Oglala Sioux Tribe, including Crazy Horse and Red Cloud. Today, the southern unit of Badlands National Park, including the White River Visitor Center, is on Pine Ridge Reservation.This part of the park is managed in cooperation with the Oglala Sioux Tribe. The White River Visitor Center has exhibits that offer information about Lakota history and culture, and on select dates, visitors can experience cultural demonstrations involving music, dancing, crafts and more.   Over 7,500 stars fill the park’s skies. There are perks to being located far from major cities. The skies over the Badlands are exceptionally dark, allowing for visitors to not only view stars and constellations, but also the Milky Way, along with its galaxies, nebulae, planets and moons. Join park rangers at the Cedar Pass Campground Amphitheater every evening between Memorial Day and Labor Day to take in the spectacular views of the night sky. To see these far-out sights a bit closer, the park provides telescopes for visitors to use. For those that are especially into astronomy, visit the Badlands in July during the annual Badlands Astronomy Festival where scientists, educators and astronomy-enthusiasts of all ages gather to share their love of all things space. If you’re planning a winter visit to the Badlands — don’t worry! While there is less park programming specifically geared towards night sky viewing during the winter months, the sky still puts on a show every night.             You might see some of America’s most famous mammals here. Badlands National Park is home to a population of the United States’ national mammal, the American Bison. Though there are about 1,200 bison in the Badlands today, their presence in this region was once in danger. As recently as the early 1800s, there were roughly 30 million bison roaming North America. By the late 1800s, however, European settlers cut that number to fewer than 1,000 animals. Soon after its establishment, Badlands National Park began to play an important role in the recovery of this species. In the 1960s, 50 bison were introduced to Badlands National Park, and in the 1980s, 20 more were added. Today, these 900 – 2,000 lb creatures love to graze on the prairie grasses of the Great Plains. With their massive size and appetites to match, bison are very important to the ecosystems in which they live. Prairie dogs like to burrow in lands that bison have grazed, and where there are prairie dogs, you’re sure to find predators such as large birds, coyotes and endangered black-footed ferrets.   It’s the perfect place for a scenic drive. Running through the north unit of the park is the Badlands Loop Road, a 39 mile scenic byway surrounded by picturesque cliffs and colorful spires. Sixteen scenic overlooks are designated along this route, allowing for visitors to step out of the car for a moment to take in the most spectacular views of the park. The byway isn’t just for cars, though — it is also favored by motorcyclists. During the summer, the gentle turns and panoramic views of this scenic drive make for fantastic motorcycle touring. Also accessible from the Badlands Loop Road are the park’s developed trails and headquarters, Ben Reifel Visitor Center. The visitor center has interactive exhibits, a 95-seat indoor theater, ranger-led programs and more. You can see the geologic formations and mixed-grass prairies up close. While the scenic byway is a great way to get an overview of the Badlands, hiking the park allows for you to get a closer look at its beautiful natural features. Designated hiking trails range in length and difficulty, from ¼ mile fully accessible boardwalks to 10 miles of varied natural terrain. For those interested in taking the path less traveled, the Badlands also offer many opportunities for hiking in the backcountry wilderness. If you can’t decide where to hike, rangers at the Ben Reifel Visitor Center are happy to give recommendations based upon trail conditions and your experience with hiking. Remember, whether hiking on developed trails or in the backcountry, it’s important to bring water and come prepared with the proper clothing for sun, rain and everything in between. With so much to see and do in the Badlands, you’re bound to make good memories Saydie and I sure did.