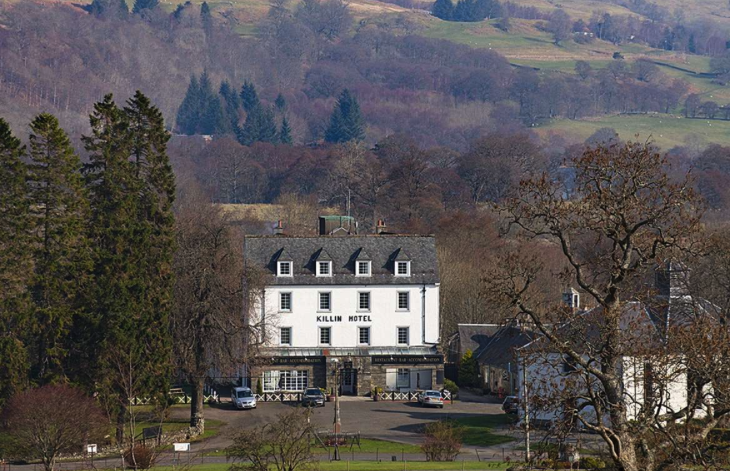 The Killin Hotel is situated in the central Highlands of Perthshire at the west end of Loch Tay. 35 Rooms, three restaurants, riverside location and affordable meals.

Killin Hotel has established its fine reputation on a friendly smile, relaxed service, great Scottish food and comfortable bedrooms. The Killin Hotel now offers 35 comfortably decorated bedrooms including the beautifully romantic Lochay four poster suite which overlooks the River Lochay toward the Tarmachan Ridge. Killin Hotel now also has five Annex Rooms directly next to the hotel offering a variety of occupancy levels up to six people in one room.
The hotel offers freshly cooked food and caters for all budgets and diets. They have daily fresh fish, seafood and shellfish deliveries along with Perthshire beef and lamb.
Killin is a village situated at the western head of Loch Tay in Stirling, Scotland. The west end of the village is magnificently sited around the scenic Falls of Dochart, the main street leading down towards the Loch at the confluence of the rivers Dochart and Lochay.
Although the Parish of Killin extends for over twenty miles from the watershed at the County March with Argyll in the West to Loch Tay in the east, and includes the villages of Tyndrum and Crianlarich, Killin itself is near the eastern end of the Parish and about a mile from the head of Loch Tay.
Two rivers, the peaceful Lochay and the turbulent Dochart emerge from their respective Glens and meet to mingle their waters for a few hundred yards before emptying into Loch Tay.
The village stretches across the peninsula so formed, being somewhat over a mile in length. It was almost inevitable that a village should spring up here, from the time when mankind drew together into communities, as here is the natural meeting place of many routes.
From the south up Glenogle and across Larig-Ilidh; from the west down Glendochart and Glenlochay; and from the east along both sides of Loch Tay, while numerous hill-passes give access to the surrounding Glens. To the north it is sheltered by the distinctive Tarmachan Ridge and eastward looms the mighty mass of Ben Lawers, highest of all Perthshire’s Bens (3984 feet), in the other direction the way to the West is guarded by the twin peaks of Ben More and Stobinian. As the visitor approaches from the West he finds that the road winds beside the River Dochart which roars around its island and over its rocks.
The Bridge which crosses the river is a very picturesque one consisting of five unequal arches and commanding one of the best known views in the country, which every year attracts thousands of tourists, and particularly photographers, from all parts of the world.
The Main Street runs roughly East and West, and at one time most of the houses were built on either side of it, but in recent years the newer houses have spread out to the North and South.
For a place of its size Killin is fortunate in possessing many well equipped shops and several comfortable hotels.
The Main Street, being straight and fairly wide, does not present such a traffic problem as in many Highland villages. Round the old Square or “Stance”, where in earlier days the Markets were held beside the gently flowing river Lochay, stand two Churches – the Parish Church and the Episcopal Church, a very fine Village Hall and the principal Hotel. Nearby the present Livestock Mart now caters for the considerable sale of Cattle and Sheep from the surrounding districts. The road then winds pleasantly along beside the river Lochay crossing it by an old single-arch bridge to continue along Loch Tayside.
There are conflicting opinions as to the origin of the name Killin. The old local tradition attributes it to the belief that Fingal, the father of Ossian, lies buried in a field behind the village, hence the name Cill Fhinn – chapel or place of Fingal. Another opinion is that the name means Cill – fhionn – white or fair Church; and yet another that it is Cill-linne, or Church by the Pool.

Before there was a Church, or any history, another race inhabited our Glens – a race whose origins have been lost, and whose very existence is only proved by the numerous tools, weapons and ornaments of stone and bronze that have been dug up at various times. There are also examples of mysterious cup-markings on rocks and stones. Near Kinnell, the ancient seat of the Macnabs, there is a particularly well preserved Stone Circle. Who were they, these “silent, vanished races” whose only memorial is carven on the imperishable rocks? What was their way of life, and who or what their gods?

The clan which is reckoned to be the oldest in Scotland, Clan Alpine, had a close connection with the district, but they early fell foul of the Campbells, and their courage was no match for the Campbell guile, with the result that one by one their lands fell into the hand of the spoiler, till finally their very name was proscribed and they became in very sooth “Children of the Mist”. Seven miles up Glendochart there stands near the road the gable-end of a house which was once the home of Rob Roy and from which for a time he carried on his trade of droving. Also, inspite of old enmities, he acted for a time as bailiff on the Argyllshire estates of the first Lord Breadalbane. The appointment however did not last long, and Rob took to less peaceable occupations, but he must have been a familiar figure in his day to the folks of Killin and its neighbourhood.

The various wars and risings which rent Scotland during the 17th and 18th centuries brought their share of trouble to Breadalbane. In 1645, the time of the Civil War, Montrose and the wild host that followed him swept through the country with fire and sword, leaving devastation behind them. Later in 1654 General Monk, fulfilling his mission of quelling the rebellion in the Highlands, placed garrisons in Finlarig and Taymouth. In 1715 the men of Breadalbane “came out” on the side of the Stuarts and played a gallant part at the Battle of Sherriffmuir: but at the time of the ’45 any tendency to rally again to the Stuart cause was sternly suppressed by Lord Glenorchy, son of the aged 2nd Earl, and as a consequence Breadalbane escaped the cruel reprisals imposed on those parts of the Highlands where the clansmen had supported Bonnie Prince Charlie.