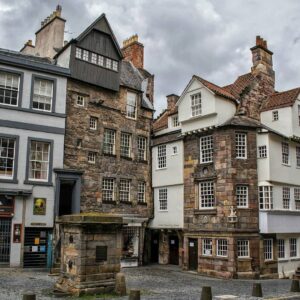 John Knox House, popularly known as “John Knox’s House”, is an historic house in Edinburgh, Scotland, reputed to have been owned and lived in by Protestant reformer John Knox during the 16th century. Although his name became associated with the house, he appears to have lived in Warriston Close where a plaque indicates the approximate site of his actual residence.

The house itself was built from 1490 onwards, featuring a fine wooden gallery and hand-painted ceiling. It had belonged to Walter Reidpath whose grandson John Arres inherited it and left it to his daughter Mariota Arres in 1556.

Her husband James Mossman, Goldsmith, refashioned the crown of Scotland for James V. He remained loyal to Mary, Queen of Scots when she was exiled in England. He worked in Edinburgh Castle with James Cockie making coins for her supporters who held the castle on her behalf during the ‘Lang Siege’. When the Castle surrendered in August 1573, Mossman was charged with counterfeiting, for which he was hanged, quartered and beheaded. The house was forfeit for the treachery, and was given in the name of James VI of Scotland to James Carmichael younger of that ilk.

Jen and I took a small walk after dinner along High Street, we passed by John Knox house as seen below.