I remember my first trip to Mount Rushmore as a kid with my mom and dad. When Saydie and I decided to skip traveling to San Diego due to COVID-19 starting to resurge in the area, we needed an alternative location to go, and that is why we decided to head north to the Black Hills, and I thought it was only fitting that I also take my kid to see Mount Rushmore. So we booked a KOA down the road and we got to visit Mount Rushmore…

The idea of a large mountain carving is credited to South Dakota State Historian Doane Robinson, who was looking for ways to attract tourists to the state. Recruiting renowned sculptor Gutzon Borglum to the project, Doane and other prominent South Dakota leaders secured Congressional support in 1925 and began to raise funds, including $250,000 from the federal government. Carving began on October 4, 1927, removing tons of granite and slowly shaping the mountain. Originally meant to portray the presidents to the waist, only the heads were finished. Borglum’s death in 1941, along with the impending American involvement in World War II, led to the end of the work on the mountain. On October 31, 1941, Mount Rushmore National Memorial was declared a completed project.

Robinson’s original idea for the memorial was to portray heroes of the American West, including Meriwether Lewis, William Clark, Buffalo Bill Cody and Red Cloud. However, Borglum wanted to appeal to a national audience and suggested featuring four presidents. Representing important events and themes in our history, Presidents George Washington, Thomas Jefferson, Abraham Lincoln and Theodore Roosevelt were selected. Each face is approximately 60 feet in height and with noses longer than 20 feet. Their mouths are also about 18 feet wide.

Commanding General of the Revolutionary Army, first President of the United States and forever known as the “Father of his Country,” George Washington is the indispensable figure in American history. Without Washington, there is no America. His steady leadership, integrity and judgement provided the foundation for our fledgling republic. His place on Mount Rushmore, his monument in the capital that bears his name, a state and numerous roads, counties, towns and universities are deserving tributes to this great man.

Thomas Jefferson is best known as the third President of the United States and the primary author of the Declaration of Independence. His wide-ranging interests included philosophy, politics, education, agriculture, architecture, music, art, literature and more. Borglum insisted on Jefferson’s inclusion on the sculpture mainly based on his forward-thinking decision to add vast lands (including South Dakota) to the nation with the 1803 Louisiana Purchase.

The amazing legacy of our 16th President, Abraham Lincoln, includes winning the Civil War and bringing an end to slavery in our country. His speeches continue to inspire people today. Despite being one of our greatest presidents, people don’t often think about Lincoln when it comes to conservation. However, he changed the course of America’s public lands when he signed a law setting aside the Mariposa Grove and Yosemite Valley as federally protected lands in 1864. This significant precedent gave life to the idea that places of scenic and natural importance should be protected for the benefit and enjoyment of the people.

It just makes sense that President Theodore Roosevelt is honored on Mount Rushmore. Often called a “force of nature” due to his energetic personality, he helped lay the modern foundation to protect wilderness and wildlife that shaped American land and culture. A New Yorker by birth, Roosevelt developed a deep passion for western lands, particularly the unique badlands of South Dakota. Though his likeness is slightly set back, the details of his eyeglasses and mustache make him an interesting part of the sculpture.

Carving Mount Rushmore was a project of colossal proportion, ambition and achievement. It involved the efforts of nearly 400 men and women. The work was exciting, but dangerous. Ninety percent of the mountain was carved using dynamite. Only the last 3-6 inches of rock were removed by drillers using jackhammers. Hand tools smoothed the stone and added small details, like wrinkles and moles. The workers had to endure conditions that varied from blazing hot to bitterly cold and windy. Each day they climbed 700 stairs to the top of the mountain to punch-in on the time clock. Then 3/8 inch thick steel cables lowered them over the front of the 500-foot face of the mountain in a “bosun chair.” Despite the dangers, no one was killed during the project.

For thousands of years, several tribes of Sioux roamed the land from present-day Minnesota, across the Dakotas to Wyoming. Generally nomadic, they followed the migration of huge buffalo herds. In the 18th and 19th centuries, cooperation with trappers was followed by conflict with settlers. After Red Cloud’s War, the 1868 Treaty of Fort Laramie guaranteed tribal ownership of the Black Hills, and land and hunting rights in Montana, South Dakota and Wyoming. However, the discovery of gold in the area resulted in Native Americans getting forced off the land. Even the traditional name of the mountain, Six Grandfathers, faded into history after an expedition including New York attorney Charles Rushmore renamed it in 1884. A legal battle for the land continues to this day.

Did you know that there’s a hidden room on Mount Rushmore? Borglum planned to create a large room within the mountain that would hold documents and artifacts central to American history. The proposed Hall of Records was to be drilled into the north wall of the small canyon behind the faces. Plans included an 800-foot granite stairway that would begin near Borglum’s studio, rise gradually to meet the canyon mouth behind Lincoln’s head, and then lead to the entrance of the great hall. A lack of funding only allowed a small portion of the tunnel to be built, and for decades, the site was ignored. 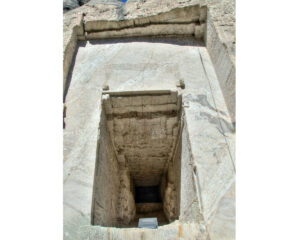 It wasn’t until 1998 when a small sealed box was placed in the tunnel that the hall was used to store records. The repository box contains 16 porcelain enamel panels. Inscribed on the panels is the story of how Mount Rushmore came to be carved, who carved it, the reasons for selecting the four presidents depicted on the mountain and a short history of the United States. This entry was posted in Blog, National Parks