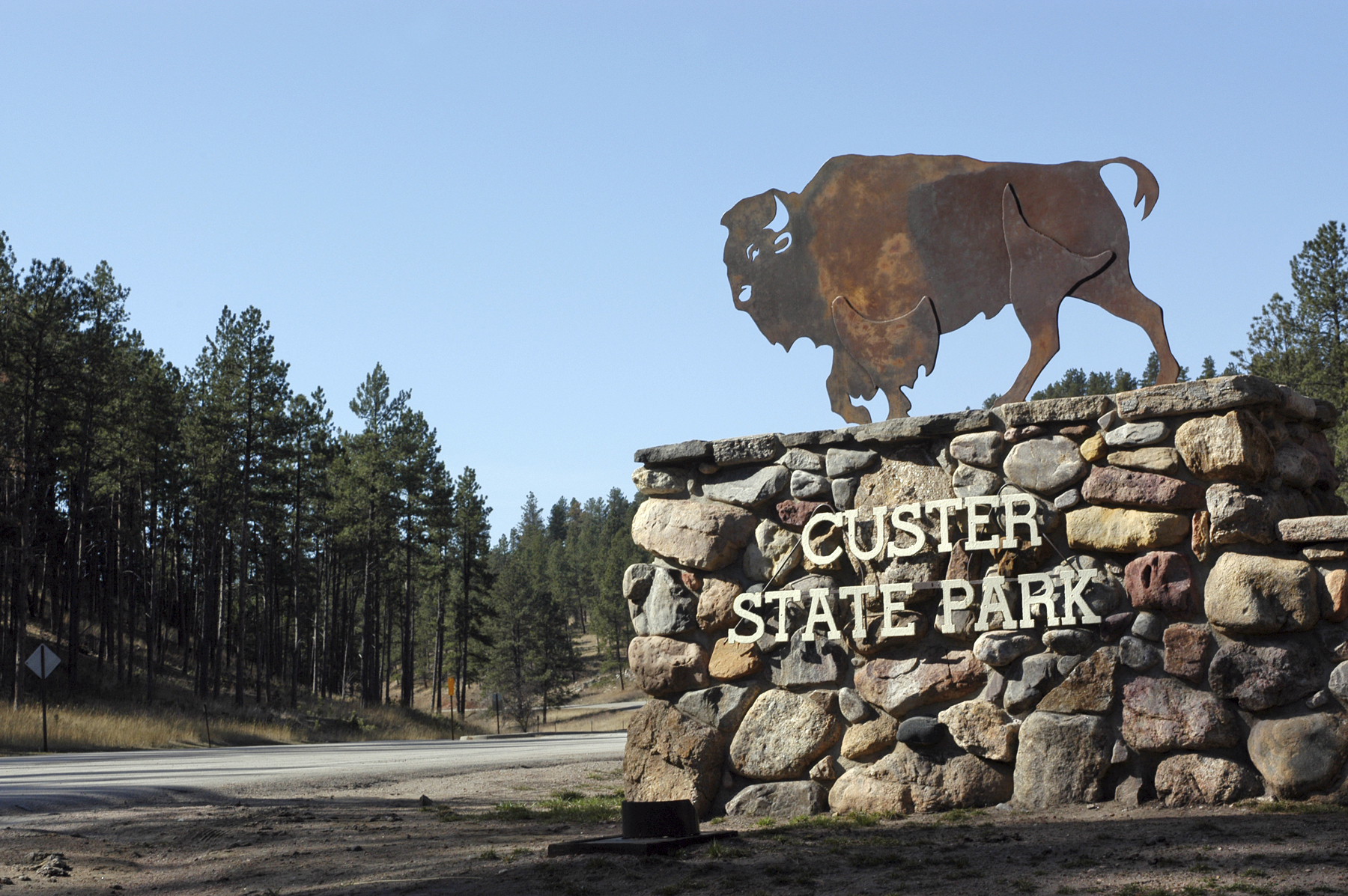 Custer State Park is famous for its bison herds, other wildlife, scenic drives, historic sites, visitor centers, fishing lakes, resorts, campgrounds and interpretive programs. In fact, it was named as one of the World’s Top Ten Wildlife Destinations for the array of wildlife within the park’s borders and for the unbelievable access visitors have to them.
One of the nation’s largest state parks, just 15 miles from the city of Custer, South Dakota’s premier State Park comprises 71,000 acres.
Custer State Park has been home to diverse cultural heritages for thousands of years and has provided an array of scenic beauty and outdoor recreation for visitors since the early 1900s.
In 1874, word spread that gold had been discovered in the Black Hills by an expedition led by Lt. Col. George Custer. One of the first groups of gold seekers, the Gordon Party, built a log fortress on the bank of French Creek to protect themselves from possible Lakota attack. Originally called Fort Defiance, a replica called the Gordan Stockade stands on the original site at the entrance of Custer State Park. Interpretive signs tell the story of this short lived illegal occupation which stood in violation of the Fort Laramie Treaty of 1868 that gave rights to the land to the Sioux.
The State of South Dakota were granted sections of land in the Black Hills to serve as school lands in 1897 but exchanged them in 1910 for roughly 50,000 acres that was called Custer State Forest (along with 12,000 acres in NW South Dakota) by 1912. The southern 50,000 acres was also known as Custer State Forest and Game Sanctuary and in 1914, the park purchased 36 head of buffalo from James “Scotty” Phillip to help preserve this magnificent creature. Today, the park’s heard totals over 1,300.
It was not until a little while later, in 1919, that the 50,000 acres were renamed Custer State Park with legislation in Pierre, helped by former State Legislator and then Governor Peter Norbeck and the park officially established.
Norbeck was also instrumental in mapping out a road through the Harney Peak range and young Custer State Park that would allow for the grandest views of the region with the help of engineer Scovell Johnson during this time. Two years and 150,000 pounds of dynamite later, the winding road around (and through) stone known as Needles Highway was completed in 1921.
Norbeck’s next venture was The Iron Mountain Highway. The route he created included blasting through the mountains to expose three different tunnels, all of which frame out Mt. Rushmore as you drive through. C.C. Gideon, the Superintendent of Custer State Park at the time, designed the road so that all of the tunnels would connect through a corkscrew spiral road that lifted the traveler up from one level to the next. Gideon referred to them as “spiral-jumpoffs”, Norbeck called them “whirly jigs”, and today they are known as Pigtail Bridges. Iron Mountain Highway took about a year and a half with the help of 16 men, finishing in 1933.
These two roads helped create the 66-mile Peter Norbeck Scenic Byway – an extraordinary man’s masterpiece of art and engineering.
The State Game Lodge served as the “Summer White House” for President Calvin Coolidge in 1927. During his stay, White House staffers stocked the creek with fish everyday to increase any likelihood of a catch. The Lodge was also visited by Dwight D. Eisenhower for several days in 1953. This stone and wood lodge was built in 1920 and is now listed on the National Register of Historic Places. There’s a hand-built cabin in the park that is known at Badger Hole. It was home to Charles Badger Clark, South Dakota’s first poet laureate.
Many of the park’s structures date back to the Civilian Conservation Corps of the 1930’s and into 1940 when the CCC men built roads, bridges, dams (which in turn created Stockade, Center and Legion lakes), a fire tower, museum, campgrounds and picnic areas.
In 1964 and 1965, the park saw a few major additions that are a huge part of its identity today. During that year, 22,000 more acres were added, which made Custer State Park 71,000 acres and one of the nation’s largest state park. In 1965, the Park held its first Buffalo Roundup and Auction which today is one of the Black Hills signature events.

The park is home to nearly 1,500 head of North American bison. Commonly known as buffalo, these massive mammals can grow to 6 feet tall and weigh more than 2,000 pounds. Other watchable wildlife include whitetail and mule deer, antelope, mountain goats, elk, coyotes, burros, bighorn sheep, birds, wild turkeys and prairie dogs. Mountain lions and bobcats are also found in the park, but they are nocturnal and reclusive toward humans. Whether you’re a casual sightseer or a serious nature photographer, the critters of Custer Sate Park put on quite a show. Most wildlife can easily be seen from your car. Bear in mind, they are wild. Keep your distance.
Custer State Park offers a unique state park opportunity. Please protect your park so it is enjoyable for everyone. All natural and cultural resources are protected. Picking up antlers, rocks or artifacts, collecting plants, feeding or disturbing wildlife is prohibited.
While enjoying the park’s lakes, ponds and streams visitors are asked not to jump or dive from bridges, rocks or cliffs. 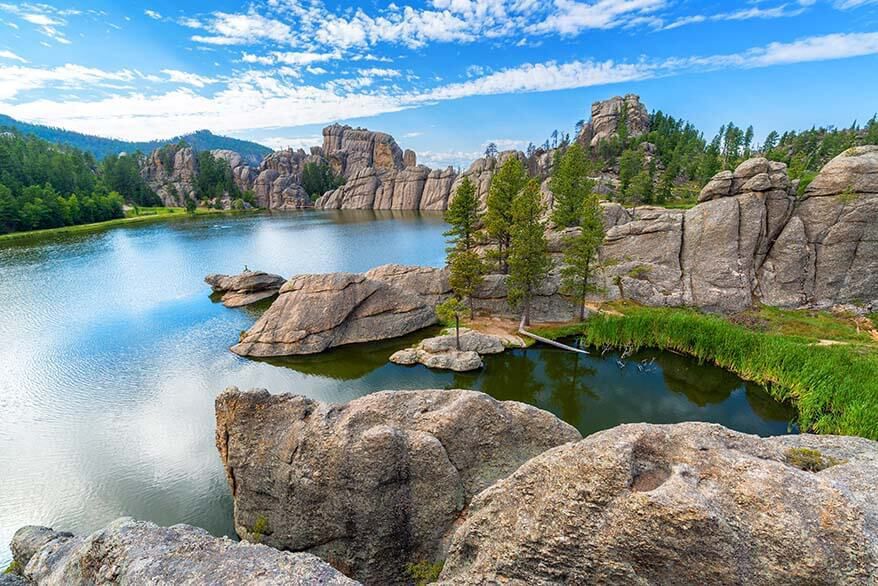 The maximum speed limit in the park is 35 mph. Conservation officers and park rangers enforce the park’s laws and regulations.
Guests are asked to leash pets and they need to be on a leash that is no longer than 10 feet in length. Pets are not allowed in any park buildings or on designated swimming beaches. Guests are asked not to leave pets unattended.
In Custer State Park warm days and cool nights are common in the summer, but July and August are typically hot. Moderate temperatures usually prevail in the winter months with some below zero temperatures. Afternoon thunderstorms in the summer may bring lightning, hail, strong winds and heavy rains. Snow may fall as early as September and may last until mid-May.
Bison are the park’s biggest attraction but remember these animals are dangerous, so please give them plenty of space. While hiking, biking or horseback riding in Custer State Park visitors should be aware of prairie rattlesnakes, ticks and poison ivy. Campers and hikers should never drink water from lakes, streams or springs in Custer State Park.
While photographing wildlife and scenery, please pull off the roadways and be aware of what is going on around you at all times.
Cell phone reception is spotty throughout the park.
Rock climbing is allowed in Custer State Park. The park encourages visitors to only rock climb under the supervision of trained instructors.