Written by trekvagabond
No Comments
This evening Saydie and I decided to head up to Sylvan Lake in Custer State Park after dinner and some camp fire time. We’ve been able to see the neowise comet pretty clearly most of this trip. I spotted it the second night while leaning back in my cap chair, it was just above the tree to the right in the distance and you could clearly see the comets tail. It pretty much was in the same spot for the entire time we were in the Black Hills. So we knew that when we got up to Sylvan Lake the view would be equally as spectacular. 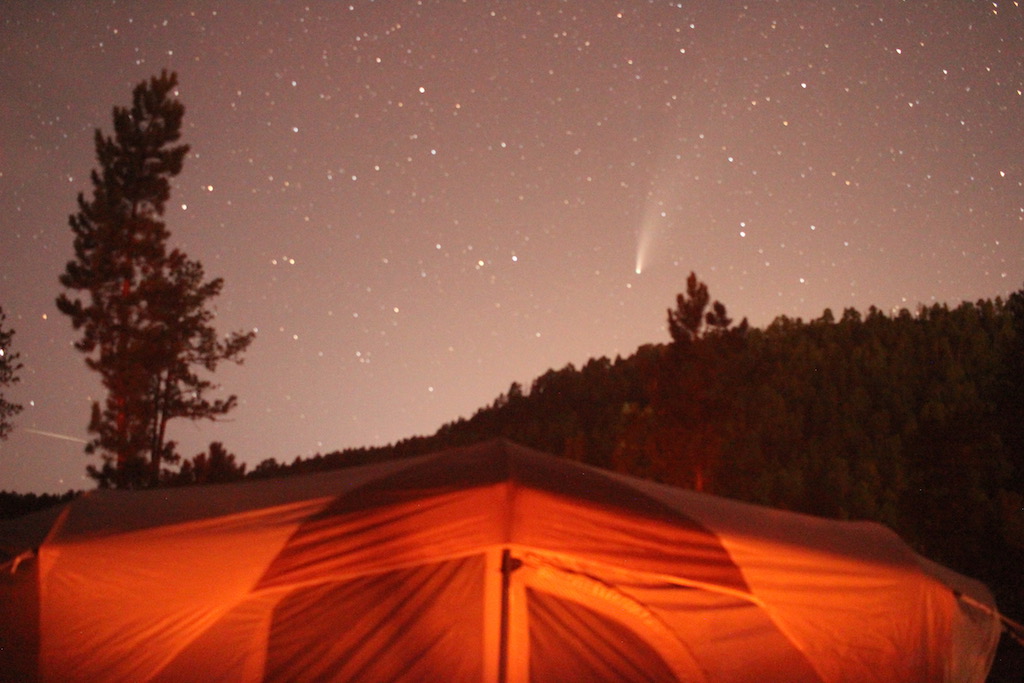 Sylvan Lake is probably the most recognizable of the five Custer State Park lakes, and of any of the Black Hills lakes for that matter. Its definitely a favorite of almost anyone who has seen it, especially photographers, artists or anyone that saw the Nicolas Cage movie “National Treasure 2: Book of Secrets” (although the location may seem off). Sylvan Lake is a very popular spot for weddings and other special occasions or as the most beautiful swimming hole one could possibly find. Now driving in this part of South Dakota can be a bit tricky at night in the Black Hills cause it is dark. And driving up to Sylvan Lake is no exception, and to get there you have to take the Needles Highway which is more than a 14-mile road. It’s a spectacular drive through pine and spruce forests, meadows surrounded by birch and aspen, and rugged granite mountains. The road’s name comes from the needlelike granite formations that seem to pierce the horizon along the  highway (see post about Needles Highway with drone video). The roadway was carefully planned by former South Dakota Governor Peter Norbeck, who marked the entire course on foot and by horseback. Construction was completed in 1922. Due to its narrow, windy roads, Needles Highway is closed in the winter months. Winding drives throughout the park are most enjoyable at a slower pace. When making plans, please allow ample time to travel at a safe speed—generally 25 miles per hour or slower. Expect travel time of about 45 to 60 minutes to enjoy Needles Highway. Driving this road made me feel like I was back in Scotland driving a single track road in Isle of Skye. So Saydie and get up to Sylvan Lake, and sure enough I am not the only one that had the idea, as I turn along the road by the lake I quickly spot all the little red dots of astrophotography enthusiast who have staked out spots along the lake to take long exposures of the Milky Way and of course the Neowise comet. I decided to stake my spot at the start of the Sunday Gulch Trail, this put the Neowise comment behind me. 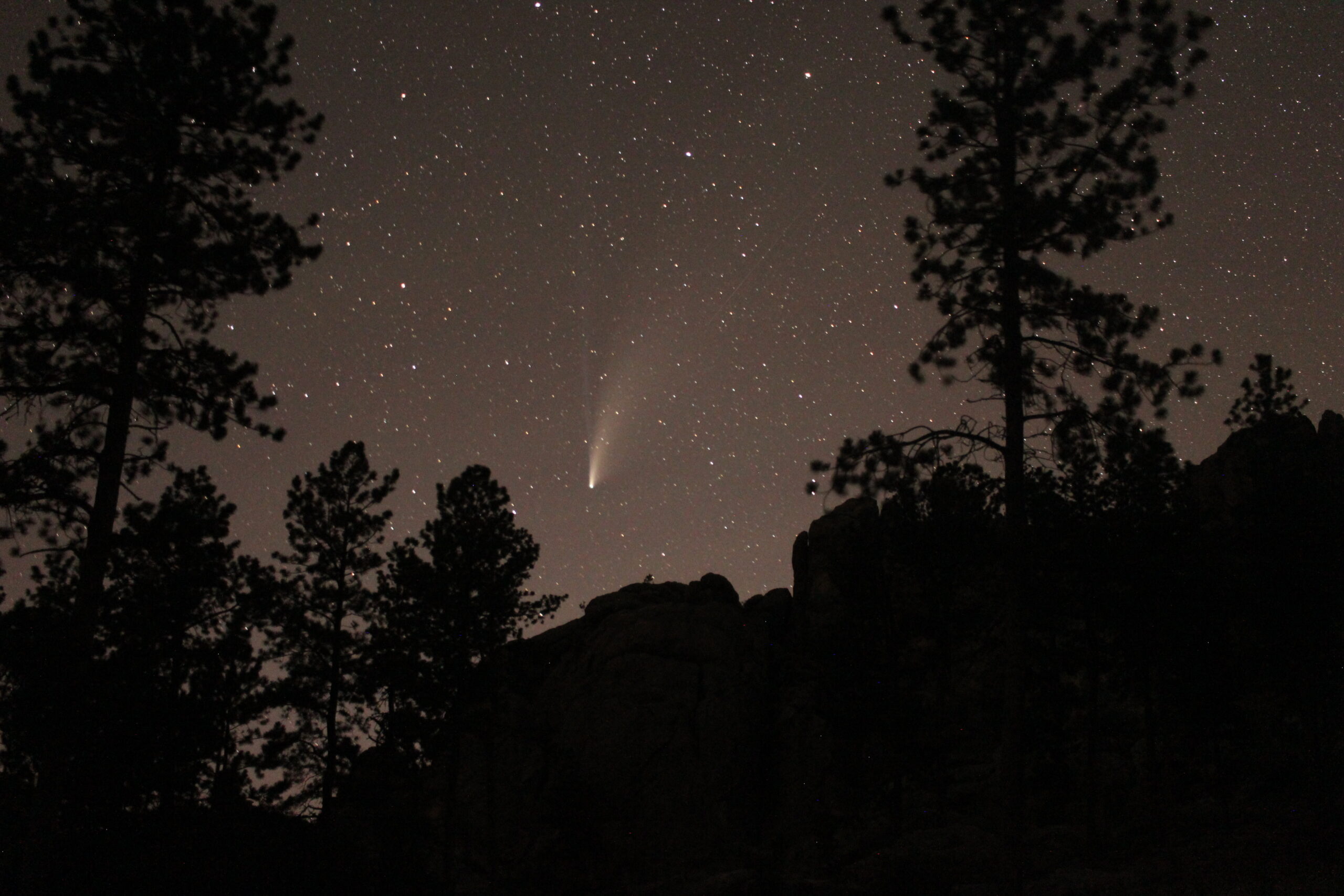 But the view that I was really excited to capture was the Milky Way over the lake. If you recall from the movie National Treasure 2 there is a rock outcrop in the movie, well that outcrop of rocks are off to the right in the photo (not scene) to give you an idea of location. In the neowise photos the outcrop is to the left. 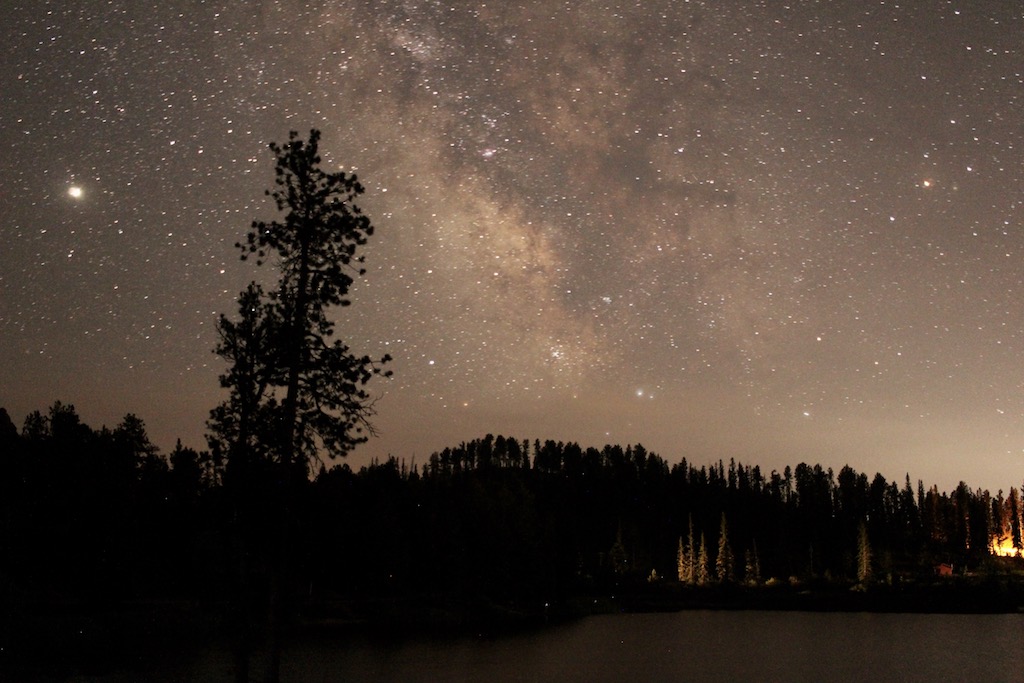 You will noticed in the above photo, to the right side in the trees you see a bright light, that is a car coming down the Needles Highway and in the next photo you will see what happens with a moving car, while taking a long exposure photo. Still pretty cool. These next two photos, Saydie and I got further up the Needles Highway after passing through one of the narrow tunnels and then parking. There were other photographers that had gotten there early in the evening that actually climbed to the tops of some of the spires to take their photos. We just stopped briefly to capture a few shots, Saydie was tired and off in the distance there was a thunderstorm that I couldn’t tell what direction it was traveling so I didn’t want to get caught in it. During the month of July, if you find yourself someplace dark like where Saydie and I were, you will have great visibility of Venus, Mars, Jupiter and Saturn.