Written by trekvagabond
No Comments
Saydie and I are heading to Devils Tower today, and our route takes us through historic Dead Wood. Deadwood, South Dakota was once one of the liveliest mining camps in the country after gold deposits were found which led to the Black Hills Gold Rush. Unlike other popular mining camps, Deadwood never died when the gold played out. Today, it continues to be the Lawrence County seat and a popular destination. The entire city is on the National Register of Historic Places.
The famous and the infamous have called Deadwood and the Black Hills of South Dakota home over the last several centuries. Lewis and Clark, Wild Bill Hickok, Wyatt Earp, George Armstrong Custer, Poker Alice, the Sundance Kid, Calamity Jane, and many others have all passed through here in search of fortune and adventure. And now Saydie and I are doing the same just passing through as our fortunes are in Wyoming at Devils Tower. 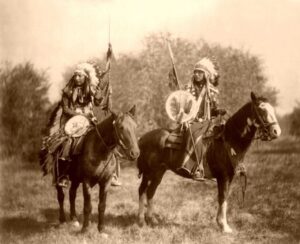 But long before the arrival of the white man, the land was home to the Cheyenne, Kiowa, Pawnee, Crow, and Sioux (or Lakota)Indians. The Sioux dominated a tract of land large enough to support the buffalo herds on which they subsisted.The Lakota never welcomed the white man to their hunting grounds and as immigration increased there was a marked decline in American Indian-white relations. The Army established outposts nearby, but they seldom entered the Black Hills. Trouble escalated when bands of Lakota began to raid nearby settlements, then retreating to the Black Hills. 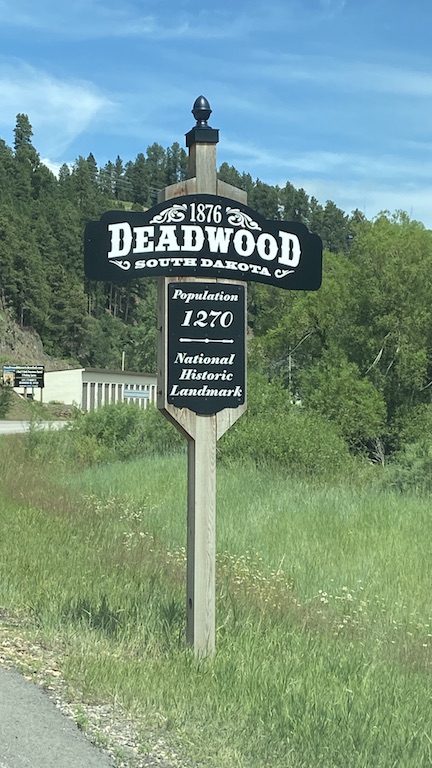 In the early 1860s, groups of explorers, miners, and homesteaders began to push into the area, which further angered the Lakota. Subsequently, a series of treaties were made with the Sioux, including the Great Sioux Reservation which included all lands from the Missouri River west to the Bighorn Mountains of western Wyoming. In 1876, the Wild West town of Deadwood was born when prospectors came across a gulch full of dead trees and a creek full of gold. Historic Deadwood, SD is just as wild today as it was when legends like Wild Bill Hickok, Calamity Jane and Seth Bullock roamed the streets. Like many towns of the American West, these particular individuals made the early days of Deadwood rough and wild. A mostly male population eagerly patronized the many saloons, gambling establishments, dance halls, and brothels, which were considered legitimate businesses and were well known throughout the area. Ninety percent of the female population of Deadwood were prostitutes. The new mining town averaged one murder per day in that first year. Wild Bill Hickok was one of those men who came looking for fortune. When he arrived, Hickok was already a legendary figure, having received numerous sensational newspaper accounts that described his legendary gun-fighting skills. Wild Bill had been dismissed from his job as a marshal in Abilene, Kansas for over-enthusiasm. The former actor, scout, lawman, and gambler quickly began to frequent the Deadwood saloons continuing his long-time habit of playing poker. But just a few short weeks after arriving, he was gunned down while holding a poker hand of aces and eights – forever after known as the Dead Man’s Hand.
This canyon became known as “Deadwood Gulch,” because of the many dead trees that lined the canyon walls. According to Colonel Richard I. Dodge, there were an estimated 800 white men mining the Hills at this time.
Calamity Jane was renowned for her excellent marksmanship, preference for men’s clothing, and bawdy behavior. Jane was said to have been an Army scout, a bullwhacker, a nurse, a cook, a prostitute, a prospector a gambler, a heavy drinker and one of the most foul-mouthed people in the West. In June of 1876, she partnered with Wild Bill Hickok as an outrider for Colorado Charlie Utter’s wagon train, galloping into Deadwood with a shipment of prostitutes, fresh from Cheyenne, Wyoming. For the remainder of her days, Calamity Jane claimed to have been Hickok’s lover. But the record shows that Wild Bill had just recently married and his letters home from Deadwood indicate that he was happily married.
As chance would have it, he never saw his wife again, and in Deadwood’s Mount Moriah Cemetery, it’s not Wild Bill’s wife who occupies the grave next to his. Wild Bill shares his final resting place, as well as his place in history — by her decree, not his — with the self-proclaimed Queen of the Wild West, Calamity Jane.
Deadwood gradually evolved from a wild frontier town to a prosperous commercial center, due, in part, to the construction of the railroad. Although the community primarily focused on its gold mining industry, Deadwood became the place where people traveled in the Black Hills to conduct their business.Deadwood moved forward into the 20th century, but the image of the Wild West town has always lingered, due to past events and the individuals responsible for making the town into a legend.
As Deadwood moved forward, the gambling and prostitution establishments were still considered legitimate businesses. However, the new century brought new beliefs and ideas, and the gambling and prostitution came under attack from reformers who believed that the two were partly responsible for causing social problems, such as drunkenness and poverty. These reformers also supported the temperance movement that was sweeping the country.
In 1919, the U.S. government had passed the Prohibition Act banning the sale and distribution of alcohol. During the roaring twenties, gaming became illegal but continued to operate behind closed doors. With the repeal of the Prohibition Act in 1935, gambling once again flourished in Deadwood until 1947, when it was officially closed. Prostitution remained a business until the 1950s when the state’s attorney shut down many of the brothels. The last one to close was Pam’s Purple Door in 1980. While gambling and prostitution establishments closed, Deadwood became the only city in the United States to be named a National Historic Landmark in 1964.